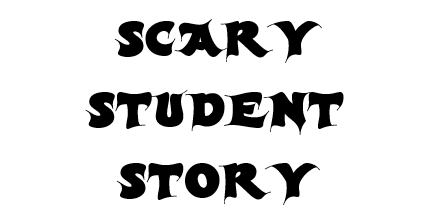 Samantha GrantLeave a Comment on A Scary StoryPosted in Student posts

Here’s a brilliantly scary story written by one of our current students, Turki from Saudi Arabia. Are you sitting comfortably? Then we’ll begin…

In the winter of 1827, Frank William was visiting a village located in the south east of England called Minster. On a dark night when  he was going back to his rented room, he saw something shine through the distant darkness. At first glance he thought that it was a torch light and he ignored it. He kept walking tiredly.

Suddenly he heard something like a breath behind him, he turned round and there was nobody. At that very moment he started getting nervous, but anyway he continued walking.  After that a huge light showed up in front of him! That was the most horrifying thing, and it immediately disappeared. In that time, Frank was so frightened and he rushed very fast, attempting to reach the safe area, which was his room, ‘as he thought’ – but in fact it wasn’t.

Eventually, Frank arrived at his room safely, but he was shocked when he saw his room’s door open. He entered very carefully and tried to turn on the light, but it didn’t work. He stood exactly in the middle of the room, doing nothing, just waiting for his fate.

After that, and without warning, something attacked him from behind and pushed him down. Immediately, Frank stood up when the light turned on at the same time – surprisingly, nobody was there! Frank was nearly crying and screaming. After a few seconds, Frank was really terrified and without thinking he decided to gather his stuff and run away.

Frank got out of his room and started running away to an unknown destination. The fog was covering all the area and he could barely see his way. After a while, Frank was exhausted and hardly walking. Suddenly the same light he had seen before appeared again, but this time it was close to him and in front of him. Frank stood straight and shouted, ‘Who is there? I am not running away this time.’ Suddenly the light disappeared and Frank kept walking.

After a long trip, Frank arrived at a small village. There were a few houses, and he knocked on one of the doors. A young man welcomed him, and Frank told him exactly what happened to him. The young man had known about that village before, and he told Frank that village was famous for ghosts, and that the man who rented the room to Frank was a fraud, and he was always doing that even though he knew about the ghosts.